THOMAS WILFRED
Light is the artist’s sole medium of expression. He must mold it by optical means, almost as a sculptor models clay. He must add colour, and finally motion to his creation. Motion, the time dimension, demands that he must be a choreographer in space. Danish-born Thomas Wilfred (1889 – 1968) came to America as a singer of early music and got involved with a group of Theosophists who wanted to build a color organ to demonstrate spiritual principles. Wilfred called his color organ the Clavilux, and named the artform of color-music projections “Lumia.” He stressed polymorphous, fluid streams of color slowly metamorphosing. He established an Art Institute of Light in New York, and toured giving Lumia concerts in the United States and Europe (at the famous Art Deco exhibition in Paris). He also built “lumia boxes,” self-contained units that looked rather like television sets, which could play for days or months without repeating the same imagery. 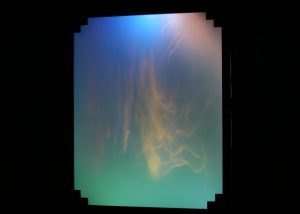