JENNY HOLZER received her M.F.A. from the Rhode Island School of Design in 1977 and had two works on display in the 1983 Biennial at the Whitney Museum, New York. She has also had solo shows at museums and contemporary art institutes during the early 1980’s in Europe, Canada, and the United States. 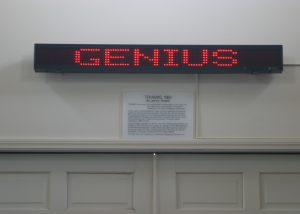