MARCEL DUCHAMP epitomizes the unique role of the artist in the twentieth century, for he was at once, creator, explorer, innovator, and commentator. One of the most influential artists of our time, he pioneered the revolutionary concept that art could be made of anything. He was a central figure in modern art from 1913, when his painting “Nude Descending a Staircase” created a sensation at the New York Armory Show, until his death in 1968.

As a prominent artist in both the Dadaist and Surrealist movements, he sought to explore the nature of artistic production from every angle. His Rotorelief particularly investigates the interaction of dimensionality and opticality. An artist of his time, this work also incorporates ideas of mechanization and thus questions the roles and relationships of art and a budding technological era.

“My present wife Susan Hopmans is a graduate of Hunter College and maintains that Duchamp is the most influential artist of the 20th century. Naturally, I agree.” 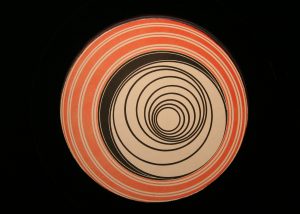