MARTHA BOTO has been considered a luminist for her body of work that directly incorporates light and illumination into the artwork itself. Her 1965 Variations Lumineuses Paris is a light box with incandescent lights. The series of geometric boxes that compose the work play with the idea of multiplicity and regularity. The mirrors exaggerate this notion by endlessly reflecting one another. And yet the various configurations of the lines within each box combat and undermine the notion of sameness. Interestingly, her use of mirrors reflects the light back and forth within the frame of the artwork rather than directly out at the viewer. Thus a dialogue is created between the rays of light and the colors. The viewer is an observer rather than a direct participant. 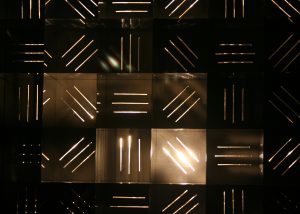